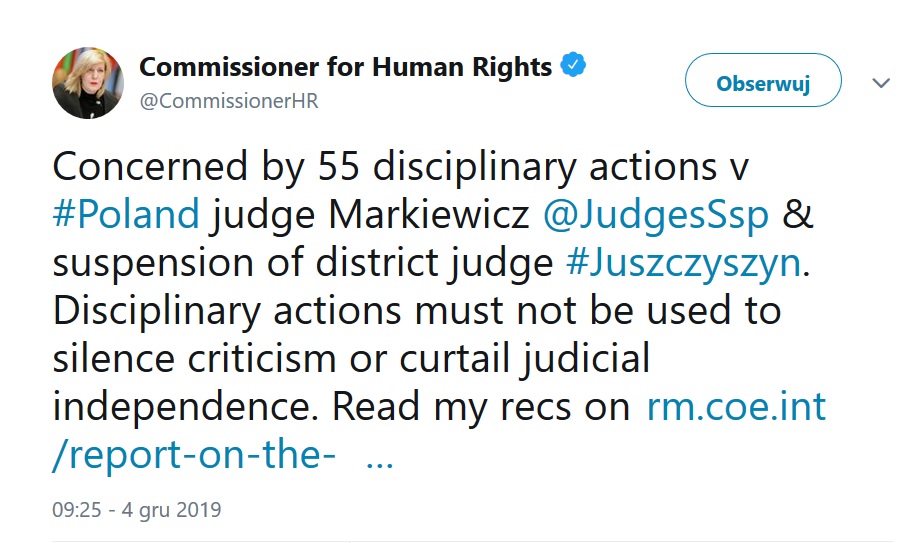 48. The Commissioner was alsoconcerned by the numerous reports she received of disciplinary proceedings being instituted against judges and prosecutors formatters such as: speaking out in public on the topic of the government’s reform of the justice system; requesting preliminary rulings by the Court of Justice of the European Union; taking part in educational activities at public events or in schools; organising moot courts; or –in one case –for accepting an equality award from the municipal council and mayor of Gdańsk.

49. The Commissioner recallsthat judges and prosecutors have the right to express their views on matters of public interest, including onreforms of the judiciary and the prosecution service, in a proportionate way, and their freedom to do so must be safeguarded. The case-law of the European Courtof Human Rightsspecifically requires that any interference with the freedom of expression of a judge be given close scrutinyon account of the growing importance attached to the separation of powers and safeguarding judicial independence.The Court also foundthat judges, in their capacity as legal experts, may express their views, including criticism, about governmentalreforms,as well as that questions concerning the functioning of the justice system fall within matters of the public interestwhose debate generally enjoys a high degree of protection under the Convention, and –in the context of an academic lecture –that “even if an issue under debate has political implications, this is not in itself sufficient to prevent a judge from making a statement on the matter”. Moreover,in its 2015 reporton the freedom of expression of judges, the Venice Commissionhas pointedout that the domestic political background of the debate in which judgestake part is also an important factor to be taken into consideration when assessing the permissible scope of the freedom of judges.The case-law of the Court of Justice of the European Union, for its part, specifies that “not being exposed to disciplinary sanctions for exercising a choice, such as sending a request for a preliminary ruling to the Court (...), constitutes a guarantee essential to judicial independence”.

50. The Commissioner considers that, beyond the persons directly affected,disciplinary proceedings are likely tohave a chilling effect on other judges and prosecutorswho wish to participate in the public debate on issues related to the administration of justice and the judiciary, which according to the European Court of Human Rightsworks to the detriment of society as a whole. She observes that members of the judiciary and the prosecution service in Poland who publicly express their views on the reform relating totheir professions incur a very real risktotheir careers. The manner in which some disciplinary proceedings arebeingconducted, as relayed to the Commissioner by various interlocutors in Poland –including from the judicial and prosecutorial professions–and as described in media reports, has understandably been perceivedas intimidating and/or asan attempt to silence outspoken or critical judges and prosecutors. The Commissioner urges the authorities to ensure that disciplinary proceedings are not instrumentalised and to secure the right to a fair trial of any person subjected to them.