The spokesman for National Council of the Judiciary (NCJ) managed to gather 88 per cent of his signatures in the Ministry of Justice (OKO.press)

The record-breaking Maciej Mitera, judge and spokesman for the NCJ, collected as many as 88 per cent of his supporters’ signatures from the judges delegated to the Ministry of Justice. Other high scorer, Slupsk-based judge Joanna Kolodziej-Michalowicz, hasn’t got a single supporter from Slupsk. Five judges from Krakow signed three lists at a time.

The day the “muzzle law” came into effect, the Sejm (lower chamber of Polish Parliament)  Administration Office published list of supporters of the “neo-NCJ”. OKO.press, has analyzed the list for Maciej Nawacki who collected 28 supporters. Five of them withdrew later their support, two others turned out to be the very person’s signature, and his wife’s. But that’s just the beginning of all the oddities and quirk anomalies to be found there.

Obviously, the least shocking revelation was the fact that the future members of NCJ backed up one another. The most amicable of them was Rafał Puchalski, ex-member of Iustitia, District Court judge in Jaroslaw, present President of Regional Court in Rzeszow, delegated to the Court of Appeal in Rzeszow and the member of the “neo-NCJ”.

Yet, of all the NCJ members only Drajewicz supported Puchalski.

Judge Maciej Mitera, the spokesman for NCJ, gathered 25 signatures. As many as 22 of them come from the judges delegated to the Ministry. That amounts to the astounding 88 per cent of “ministerial” votes. Three signatures are by judges from Warsaw who were not connected to the Ministry. One of them was promoted to the post of Court President shortly.

On Mitera’s list first entry is Lukasz Piebiak’s. Piebiak, former under-secretary in the Ministry of Justice, was ousted in the aftermath of the August 2019 “hate scandal”. Those judges who have worked in the Ministry, are indicated by an “M”:

Drajewicz in the footsteps of Mitera

Dariusz Drajewicz, a judge in the District Court in Warsaw, Mokotow, started collecting signatures from the delegated to the Ministry, too. His supporters were:

Rafał Puchalski – President of the Regional Court in Rzeszow, M

The names toward the end of the list aren’t quite random, either. One of the judges is Drajewicz’s partner, another one works in NCJ, Konrad Wytrykowski is a judge in Disciplinary Chamber in the Supreme Court, judge Lukasz Kluska had been made Court President by Ziobro’s Ministry of Justice  even before signing the lists.

The list of supporters for Jaroslaw Dudzicz, District Court judge in Slubice, starts in somewhat more optimistic note. In the beginning the whole page is signed by the local Slubice judges:

The remaining six signatures form a “Krakow list” (as explained below), printed out as a separate sheet. It has names of the following persons: Dagmara Pawełczyk-Woicka, Bartłomiej Migda, Piotr Skrzyszowski, Irena Bochniak, Przemysław Wypych, and added as the sixth judge, Jędrzej Kondek.

Joanna Michalowicz-Kolodziej has been proposed to NCJ by her husband, Andrzej Michalowicz, who serves as the President of the Regional Court in Slupsk, nominated by Zbigniew Ziobro. District Court judge from Slupsk broke the record in the “outsider” category – she hasn’t got a single signature from Slupsk, not even from the region.

The list consists of three parts. The first one contains 15 signatures. Almost all of them (13 of 15) are “ministerial” judges, including well-known figures in the like of ex-vice minister Lukasz Piebiak. Two signatures outside of the Ministry, are by Marek Jaskulski and Maciej Nawacki, both members of the “neo-NCJ”.

The following are all the signatures for the judge Joanna Kołodziej-Michałowicz:

The second page contains signatures of judges from Southern Poland. Far from Slupsk, but closer to Zbigniew Ziobro. The first five of them are “good change” judges from Krakow courts. The next four ones are those who worked in the Ministry of Justice.

The third page contain names of judges from Katowice and Dabrowa Gornicza, which are admittedly situated somewhat nearer to Slupsk than Krakow, but 600 kilometers remain nevertheless. Five of them, by decision of Zbigniew Ziobro’s Ministry of Justice, have been recently promoted to managerial posts. Rafal Stasikowski ultimately made his way even to the Supreme Administrative Court.

The judge has also managed to collect the most signatures from the future members of NCJ. They were Marek Jaskulski, Jędrzej Kondek, Maciej Mitera, Maciej Nawacki, Dagmara Pawełczyk-Woicka, Rafał Puchalski.

Of all the 30 supporters as much as 60 per cent are those who have worked in the Ministry of Justice (18 judges). Thus, the judge from Slupsk has got three kinds of supporters: “ministerial”, “Krakow list” and judges from Katowice and Dabrowa Gornicza serving in various managerial posts.

Three members of NCJ have sheets of paper printed out in exactly the same way, showing the same set of five judges from Krakow: Dagmara Pawełczyk-Woicka, Bartłomiej Migda, Piotr Skrzyszowski, Irena Bochniak, and Przemysław Wypych. They only change order.

The typical example of such “Krakow list” with all the five signatures is the list supporting the judge Jedrzej Kondek: 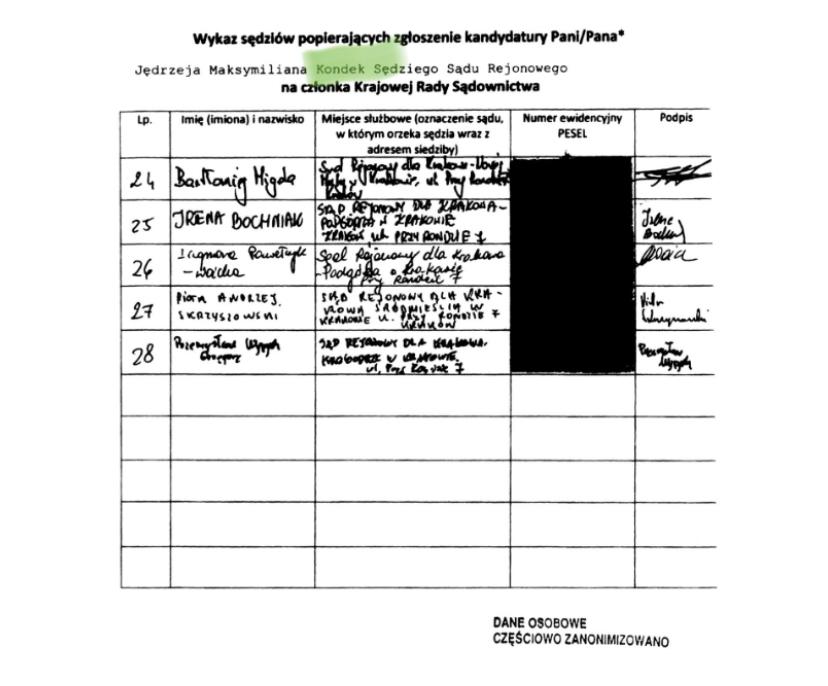 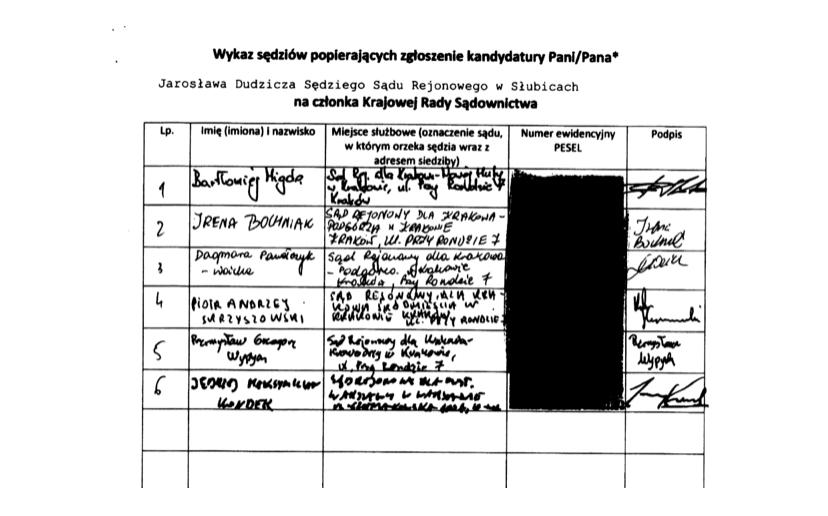 The following list belongs to judge Joanna Kołodziej-Michałowicz. Here, too, we find the same five signatures of judges from Krakow, the sixth being judge Jedrzej Kondek, and three other judges working on delegation in the Ministry of Justice. 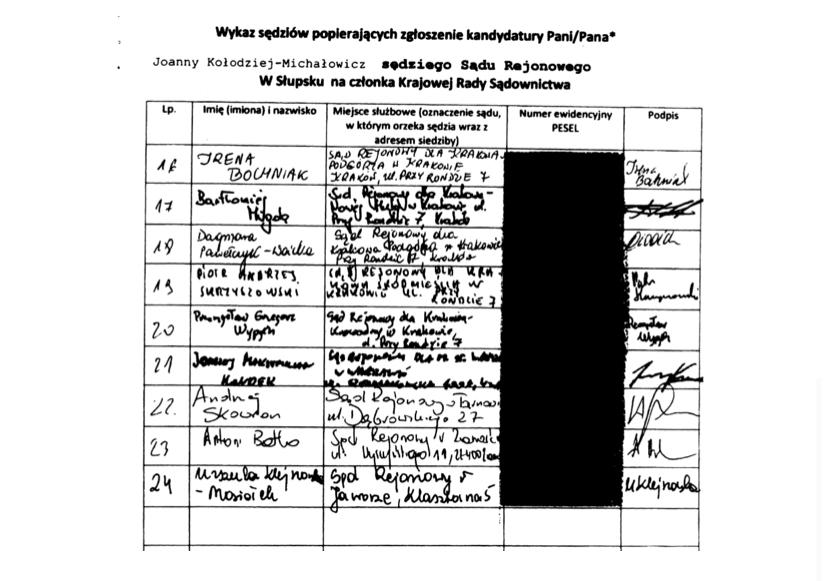