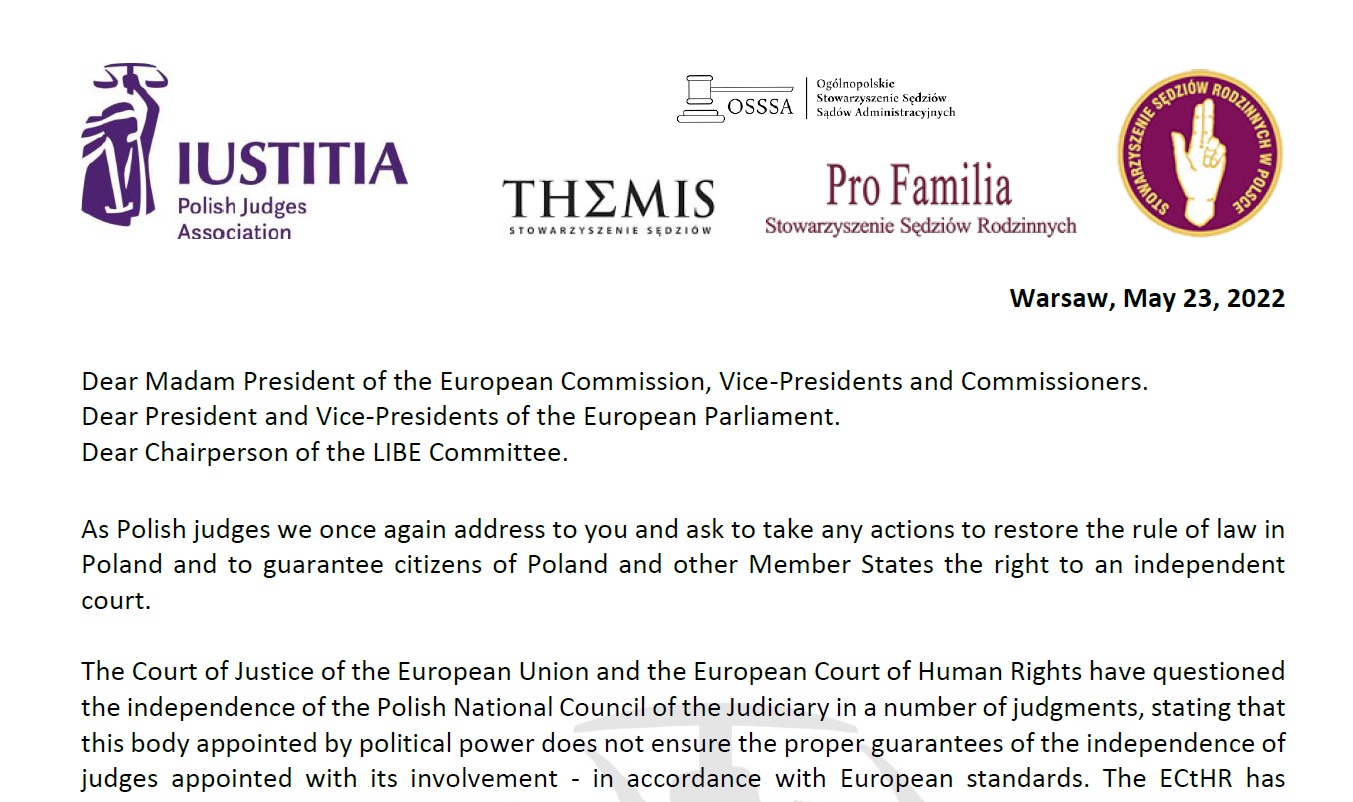 As Polish judges we once again address to you and ask to take any actions to restore the rule of law in Poland and to guarantee citizens of Poland and other Member States the right to an independent court.

The Court of Justice of the European Union and the European Court of Human Rights have questioned the independence of the Polish National Council of the Judiciary in a number of judgments, stating that this body appointed by political power does not ensure the proper guarantees of the independence of judges appointed with its involvement - in accordance with European standards. The ECtHR has pointed out a systemic problem of the functioning of the NCJ and found that any judge appointed to the Supreme Court with the participation of the NCJ did not meet the requirements of Article 6(1) of the ECHR.

It should be noted, that the Polish government has failed to implement the CJEU and ECtHR judgments concerning the National Council of the Judiciary, and the draft bill amending the Act of the Supreme Court, proposed by the President of Poland and currently before the Polish Parliament, does solve the NCJ problem at all. What is more , it provides a basis for defectively appointed judges to sit on the Supreme Court's new disciplinary body, called the Professional Responsibility Chamber. This is contrary to ECtHR rulings and will result in further complaints to the ECtHR and preliminary questions to the CJEU. The existence of this Chamber means consent to systemic violations of the European Convention on Human Rights in an EU Member State.

With the participation of the so-called neo-NCJ, about 2000 judges have been already appointed. Their verdicts can be successfully challenged due to the flawed appointment procedure. Further cases are pending before the Court of Justice of the European Union and the ECtHR concerning the effects of the appointment of judges with the participation of the politicised National Council of Judiciary. The Polish Judges` Association Iustitia has prepared a comprehensive bill draft implementing all the rulings of the European courts, which after public consultations was submitted for legislative work by the opposition parties. Unfortunately, the Polish Sejm (lower chamber of Polish parliament) not only failed to implement the judgments of the CJEU and restore the independence of the National Council of the Judiciary from political power, which is necessary for it to fulfil its constitutional tasks of protecting the independence of judges, but also it did the opposite - a few days ago, in the same political procedure,it elected the judicial members of the National Council of the Judiciary for another term of office. This Council was composed of persons with connections to political power, disgraced, including alleged participants of the so-called 'hate scandal' at the Ministry of Justice, whose aim was to discredit and fight judges defending citizens' right to an independent court. Presidents of courts, who are directly subordinated to the Minister of Justice - the Prosecutor General, were elected as Chair and Vice-Chair of the NCJ.

1. ECHR and CJEU judgments Another four-year term of office for a defectively appointed National Judicial Council must result in a systematic increase in the number of defective judicial appointments in Poland. Such judges in four
years' time may constitute half of the entire Polish judiciary. This will mean politicisation of the judiciary in Poland and a lowering of the quality of jurisprudence of courts. A perfect illustration of this state of affairs - as reported in the free media - is the comment made by persons active in and connected with the NCJ about the selection of several judges, that such persons under normal circumstances could only dream of promotion. Among judges promoted by this Council were disciplinary commissioners (appointed by Zbigniew Ziobro – Minister of Justice and Prosecutor General), who prosecuted judges for their judgments. On the contrary – more than thousand judges
have refused to participate in such 'rigged' competitions for several years. Without a change to the National Council of the Judiciary, the degradation of the Polish judiciary will continue.

We therefore believe it is necessary to initiate anti-infringement proceedings before the Court of Justice of the European Union in order to enforce European standards for selection of judges to the National Council of the Judiciary which: are consistent with the Polish Constitution, will ensure real participation of the judicial self-government, are transparent and thus guarantee selection of judges in accordance with the law and provide independence of the courts as provided Art. 47 of the Charter of Fundamental Rights, Art. 19. 1 second sentence of the Treaty of the European Union and Art. 6. 1 of the European Convention of the Human Rights.

The citizens of Poland expect that the National Council of the Judiciary will be elected in accordance with the Constitution of the Republic of Poland.

They also expect the Polish government to comply with the recommendations of the EC following the judgements of the CJEU and ECtHR. Polish women and men want a real restoration of the rule of law in Poland. A necessary condition for this is that changes are made to the NCJ in the way indicated above. Simply papering over an extremely flawed disciplinary system will not change much in this regard. The rule of law cannot be restored by fighting only the effects and not the causes of the crisis.

Themis Judges Association
Beata Morawiec – President of the Main Board