* Circulated in the language of submission only.

practice, from attack, harassment or persecution as they carry out their professional activities.

III. Challenges to an independent and impartial justice system

4 See the interview in the newspaper Rzeczpospolita (The Republic) with Jarosław Kaczyński, current leader of the Law and Justice Party, of 18 January 2016 (quoted by the Supreme Court in its memorandum of 6 March 2017 to the European Commission on the situation of the judiciary in Poland).

by the European Commission, which has adopted four recommendations to address the “systemic threat to rule of law” existing in Poland.10

A. Judiciary under attack

1. Appointment of judges of the Constitutional Tribunal

11 The “Fair Courts” portal (www.sprawiedliwesady.pl) contains a section called “the privileged caste”, containing articles about judges caught driving while intoxicated and accused of shoplifting and of starting bar fights. It also cites cases of real or alleged mistakes by courts, for example, a judge who released a recidivist paedophile from custody and a court that took 16 years to issue a final ruling on the brutal murder of an elderly woman.

Sejm adopted the Act on the Constitutional Tribunal. The new Act introduced a new provision on the appointment of judges of the Constitutional Tribunal (art. 137), which allowed the outgoing legislature to fill all five positions on the Tribunal that would become vacant in 2015, including two that would become vacant only after the general elections. On 8 October 2015, the outgoing Sejm selected five judges — three to replace judges leaving on 6 November 2015 and two to replace those whose tenure would expire on 2 and 8 December 2015. The President of the Republic, however, refused to accept the oath of the five new judges, who are often referred to as the “October judges”.

2. Lack of publication and implementation of the Constitutional Tribunal’s judgments

12 According to article 190 (1), judgments of the Constitutional Tribunal are final and universally binding.

13 In Findlay v. United Kingdom, for instance, the European Court stated that “it is a well-established principle that the power to give a binding decision which may not be altered by a non-judicial authority is inherent in the very notion of ‘tribunal’ and can also be seen as a component of the ‘independence’ required by Article 6, para. 1” of the European Convention on Human Rights (para. 77).

— aimed at paralysing the Tribunal.14

11 judges, reintroduced the majority vote for the adoption of decisions, introduced exceptions to the “sequence rule” and reduced the minimum delays for hearings. However, the Act also introduced a number of problematic provisions, for instance those allowing the duly notified Prosecutor-General to block the consideration of politically sensitive cases with his/her absence and those concerning the postponement of a case for up to six months upon request by four judges. Both the Venice Commission and the European Commission expressed the view that the new Act raised concern regarding the effectiveness of constitutional review, the independence of the Tribunal and the rule of law.16

3. The three acts of December 2016 and the creation of a “new” Constitutional Tribunal

(a) The Act of 30 November 2016 on the Legal Status of Judges of the Constitutional Tribunal;

(b) The Act of 30 November 2016 on the Organization of and Proceedings before the Constitutional Tribunal;

— which the Tribunal had already declared to be unconstitutional for the most part in its judgment of 11 August 2016 — ceased to exist.

(a) Article 5 of the Act on the Legal Status of Judges, according to which judges of the Tribunal take office from the moment they take the oath before the President of the Republic. This provision aims at enabling the unlawfully appointed “December judges” to take up their functions;

18 According to government officials, this power stems directly from the mandate that the Polish people entrusted to the ruling majority at the last election. It is the Government’s duty, in its opinion, to exercise ultimate control over the legality of the Constitutional Tribunal’s decision, as it has greater democratic legitimacy than judges by virtue of having been elected.

(c) Article 10 of the Implementing Act providing the possibility of early retirement for Constitutional Tribunal judges, which constitutes an interference by the legislative branch with the independence of the Tribunal insofar as it aims at encouraging the current judges of the Tribunal to resign in advance of the end of their term of office.

C. Reform of the judicial system

21 The Venice Commission observed that this threshold is very high, and it will become virtually impossible to achieve after the new Act on the National Council of the Judiciary enters into force. See opinion 904/2017, para. 106.

court concerned or the National Council of the Judiciary, as was the case under the previous Act.

70 is equally problematic, since it would allow the Minister to exert influence over individual judges, thereby undermining their independence. In particular, the lack of a time frame for the adoption of a decision allows the Minister of Justice to retain influence over the judges concerned for the remaining time of their judicial mandate.

2. Act on the Supreme Court

of powers, especially when considered in combination with the simultaneous reform of the National Council of the Judiciary.

27 The abolition of the Military Chamber will lead to the automatic retirement of all its judges with no opportunity for them to seek continuation in office or reinstatement. OSCE/ODIHR noted that the mass retirement of all judges regardless of age is “inherently incompatible with the principles of security of judicial tenure and of separation of powers protected by international standards” (see JUD- POL/315/2017, paras. 129−131).

appointed upon recommendation of the newly constituted National Council of the Judiciary “would decide on issues of particular importance, including the regularity of elections, which is to be decided by the Extraordinary Chamber”. The risk is that the whole judicial system “will be dominated by these new judges, elected with the decisive influence of the ruling majority”.28

3. Act on the National Council of the Judiciary

1 by the executive. The fact that judges will no longer have a decisive role in the appointment of the 15 judicial members of the Council puts the new election method at odds with relevant international and regional standards. In this regard, the Special Rapporteur notes that while the National Council of the Judiciary is not a judicial authority per se and does not exercise judicial functions, its role of safeguarding judicial independence in Poland requires that it be independent and impartial from the executive and legislative branches.

33 See, for example, Council of Europe, Recommendation CM/Rec(2010)12 of the Committee of Ministers to Member States on Judges: Independence, Efficiency and Responsibilities, which provides that “[n]ot less than half the members of such councils should be judges chosen by their peers from all levels of the judiciary and with respect for pluralism inside the judiciary”.

appropriate to achieve the declared goals. The main effect — if not the main goal — of these measures has been to hamper the constitutionally protected principle of judicial independence and to enable the legislative and executive branches to interfere with the administration of justice. As a result, the independence of justice and institutional checks and balances are now under threat in Poland.

A. Attacks against the judiciary

(a) Removing the discretionary power of the Ministry of Justice to appoint and dismiss court presidents;

(b) Amending the new retirement regime applicable to common  court judges so as to apply it only to judges who have taken up their functions following the entry into force of the law;

(c) Removing the discretionary power of the Minister of Justice to prolong, on a case-by-case basis, the mandates of individual judges until the age of 70.

D. Act on the Supreme Court

(a) Amending the new retirement regime applicable to common  court judges so as to apply it only to judges who have taken up their functions following the entry into force of the law;

(b) Removing the discretionary power of the President of the Republic to decide, on a case-by-case basis, the prolongation of the mandate of Supreme Court judges;

(c) Removing the additional discretionary powers conferred on the President of the Republic vis-à-vis the Supreme Court and its judges, particularly in relation to his/her power to choose the First President of the Court among five candidates elected by the General Assembly of the Court, define the internal structure of the Supreme Court and adopt its rules of procedures;

(d) Removing the provisions concerning the automatic retirement of all judges of the Military Chamber and providing for the reassignment of the judges currently sitting in the Chamber, with their consent, to another chamber of the Supreme Court;

(e) Eliminating the provisions concerning the participation of lay judges in proceedings before the Supreme Court concerning extraordinary appeals and disciplinary cases;

(f) Reviewing the vast ratione materiae jurisdiction of the Extraordinary Chamber and the Disciplinary Chamber in line with the recommendations of the European Commission, the Venice Commission and OSCE/ODIHR.

E. Act on the National Council of the Judiciary

(b) Removing the provisions concerning the early termination of the mandates of all the current judicial members of the National Council of the Judiciary. 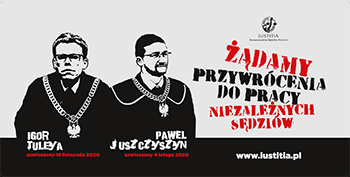